The history of coffee is long and dates back to the 6-7 century. There are many stories about how and who discovered it. One is about an Ethiopian goat herder named Kaldi. He discovered coffee when he noticed how excited his goats became after eating the red berries from a coffee plant.

The earliest credible evidence of either coffee drinking or knowledge of the coffee tree appears in the middle of the 15th century, in Yemen in southern Arabia. In the beginning, in Yemen, the coffee beans were roasted and brewed just the way they are today. In the city of Moka, the coffee was kept as a treasure. However, they were not able to keep it long. From Mocha, coffee spread to Egypt and North Africa. By the 16th century, it had spread through the Middle East, Persia, and Turkey. From the Muslim world, coffee drinking spread to Italy, then to the rest of Europe, and coffee plants were transported by the Dutch to the East Indies and to the Americas.

Coffee plants grow within a defined area between the tropics of Cancer and Capricorn, termed the bean belt or coffee belt.

The beans we use today to make coffee are the seeds of the fruit. 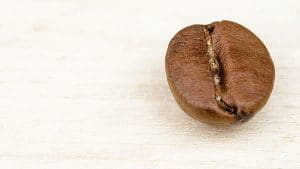 There are 124 different species of coffee plants, but only 2 of them are used to produce coffee beans.

Coffea Arabica (Arabica) – This species makes up about 60%-70% of the world’s market for coffee beans. Arabica being grown on steep terrain makes mechanical harvesting impossible. Hand-picking ensures a better quality of selection. The Arabica beans are bigger, oval, and with dark green color. The middle cut is curved (S-form). Grows at an altitude of 900 -2000m. The plant is more delicate and with lower resistance to pesticides and diseases. It contains between 0.8% – 1.4% caffeine. It is sweeter (8% sugar) and with more lipids (13%-17%). Arabica beans taste sweeter, with more herbal, fruity notes.

Coffea canephora (known as Robusta) makes 30% – 40% of the world market. The beans are smaller with a circular form and straight cut. This plant grows at a lower altitude from 0 to 700m and is more resistant to pesticides and diseases. Caffeine – 1.7% -2.5%, sugar 5%, Lipids – 7%-11%. The Robusta is more used for the preparation of instant coffee. Since they have less oil and sugar, they often have more natural, earthy, heavier flavors.

The coffee Processing method is the second most important factor after the roasting on building the final cup profile.

Natural – Natural Processing is when coffee beans are dried within the coffee “cherry.” The basic approach is to harvest ripe coffee cherries. Then spread them out on a concrete patio and let them dry slowly, covering with tarps to block the sun and delay drying if necessary, for 2-3 weeks or more. Once the fermenting fruit has imparted just the right amount of bright citrus and berry notes, the farmers use machines called “pulpers” or “hullers” to mechanically remove the fruit. The final step is to give beans a little rinse. Then, they get graded and bagged for shipping.

Washed – The washing process is widely used across Latin America and East Africa. It requires the cherry and mucilage surrounding the parchment to be removed using friction, fermentation, and water.

The ripe cherries are picked, delivered to a wet mill, and loaded into a de-pulping machine, which forces the beans out of the cherry. At this stage, the beans are contained within the pulp of the cherry, also known as the mucilage. This sticky mucilage is composed of natural sugars and alcohol. It contributes massively to the coffee’s sweetness, acidity, and overall flavor. After that, the beans are put into fermentation tanks for around 12-24 hours, dependent on temperature. The next step is for the beans to be washed. This can either happen in tanks of clean water or in channels. At this point, they are taken to a drying bed, or tables and they are left there for 10-22 days. This method brings a bright and clean flavor to the coffee taste.

Semi washed – In this process, the coffee is picked, de-pulped, and then partly sun-dried until the moisture content of the beans reaches 30%-35%. This process is most commonly associated with producing countries in Indonesia. Indonesian beans (and particularly Sumatran beans) are often associated with woody, earthy or spicy flavors that are thought to result from this unique process.